HAPPY BIRTHDAY
NEVERMORE!!
You've probably seen tutorials, seen them at online stores, and you've probably seen it in the comics and movies because without it... Harley just wouldn't be Harley Quinn without her bat.
One of my dearest friends [a.k.a. Nevermore!] absolutely loves Harley Quinn and her birthday is this month so, in-between all of the other things I have going on, I bought an official Louisville Slugger, sanded the brands off, cleaned up the entire bat (from its factory varnish), hand-laid everything (NO STENCILS) and then used paint pen markers (available in thin point here and thick point here) in two different sizes to get the colors for the letters as well as write out the entire wording along the bat. There are smudges, fingerprints, kissed lips smudged (hand drawn, thank you) and so much more detail that it's almost like Harley Quinn made it herself! 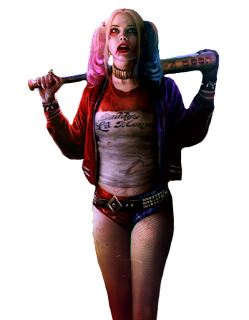 No, the diamonds are not perfect and it all looks like it was drawn on with some fatty Sharpies but think about it; Would Harley Quinn have taken her baseball bat to the nearest painter to have it done up? Look at her clothes, are any of them symmetrical and look brand-new? No. Harley Quinn is NOT like that. Her tattoos, makeup, her hair color is even in shambles.
Below are a few images of the process up until the end result. Further down is a video made afterwards before it was picked up today. I've got to say, I'm pretty proud of this bat as I had second thoughts throughout the entire making but all-in-all and considering how many others have made theirs, I'm pretty proud to have my signature and EC on this bat.
The video directly below is a small "progress" video. Sorry for the quality and shakiness in the videos, had to use my tablet because I didn't have my Canon charged. I fail!!
This video is the final video showcasing the entire bat. Again, I apologize for the shakiness and the quality, I was using my tablet because... I fail at life, apparently!
These images down below are the finished product. Do enjoy!

What's something you'd like to see us build or a painting made of? Let us know either here or on our social media!
Posted by Entwined Chaos No comments: